All attendees are invited to join us to continue conversations over 4:15 afternoon tea at Measure (400 5th Avenue at 36th) following the presentation. RSVP for tea is required by November 1st. RSVP here.

Details on the talks and event are below.

Four graduate student women working in analytic philosophy — Bianca Crewe, Louise Daoust, Emily Sullivan, and Christine Susienka — will present their work in Room 5414 at the Graduate Center, CUNY, 365 5th Avenue. Details on the speakers and their talks, including abstracts, are below.

Crewe, “Beyond ‘Bad Data’: Data and Normativity in a Naturalized Scientific Framework”

Within feminist science studies, it is generally acknowledged that value-free science is neither possible nor desirable. Following this acknowledgement, feminist naturalized empiricism suggests that it is possible to determine which values are justified in science by treating them like scientific hypotheses, subject to empirical testing and subsequently confirmed or disconfirmed by the relevant data. Thus, it is claimed that values have empirical content and can be evaluated as such. Furthermore, many scholars in this tradition argue that there is empirical evidence for commitments to gender and racial equality, and that therefore feminism can be vindicated from within a scientific framework. This account likewise claims to allow for the dismissal of racist, androcentric, or otherwise oppressive worldviews as disproved rather than as violating the objectivity of science. I contend that assumptions surrounding data and evidence are a central and unexplored problem for feminist naturalized empiricism, and that these assumptions precede and undergird the problem of adjudicating between political values in the sciences. Specifically, I argue that many feminist naturalized empiricists’ appeals to data as evidence for the justification of certain political commitments are premised on a specific, though unacknowledged, conception of data itself—namely, as neutral, objective, and outside of the workings of the power structures such theorists seek to expose. Ultimately, I argue that if our conception of the natural world is expanded to include political values, then the data used to justify our engagement with specific political commitments will also be value-laden. Overall, I hope to highlight both the insufficiency of a wholly naturalized empiricist evaluative framework in the sciences and the necessity of non-revisable political commitments designed to structure scientific endeavors and the treatment of data.

A longstanding puzzle in philosophy concerns how to fit colors into our scientificworldview. Explicitly or implicitly, color science has tended to rely upon an objectivist account of color according to which colors are mind-independent, physical properties. Color systems are modeled as striving to discount contextual factors, such as facts about illumination, in order to present or represent colors constantly: as invariant despite dramatic changes in proximal stimulation. Objectivism is motivated by an interest in explaining how perception guides action — an interest that has remained at the heart of color science. It also has a rich philosophical pedigree.

There is increasing acknowledgment among philosophers, however, that color vision isn’t perfectly constant: surfaces don’t look exactly the same under different viewing conditions, and this ought not necessarily be understood as a perceptual shortcoming. In response, there’s been a resurgence of interest in relationalism about color, the view that color is a property that exists between a perceiver and a physical surface. Instead of appealing to perceptual constancy to account for the similarity in how a particular surface appears across contexts, relationalists are motivated by the fact that surfaces appear differently under different viewing conditions. They embrace experiential variation, identifying color properties with the fleeting, particular relations that are manifest between perceivers and their environments, or with properties of these relations.

I argue that in embracing color as a maximally fine-grained phenomenon, these relational theories fail to acknowledge perceptual constancy as a feature of color vision at all. The result is less than innocuous: the action-guiding component of color is rendered merely parasitic on our account of color perception. Moreover, these views fail to speak to what makes color a subject worthy of scientific inquiry, a fact that helps to explain why relationalism remains peripheral to the methodological choices of color science. In conclusion, I appeal to phylogenetic history in proposing a novel kind of relationalism, one I argue results in better congruence between our metaphysical ambitions and the more practical interests of color science.

However, when we want to explain why there are macrolevel similarities between disparate systems, then it is less clear if abstracting away from irrelevant causal details still leaves us with a causal explanation. Many have argued that Renormalization Group explanations of phase transitions that explain macrobheaviors of diverse systems are non-causal explanations. The challenge is that when we explain similarities between systems we are not only abstracting away from irrelevant causal details of the specific systems, but that we are ignoring causal details altogether. It seems that we are left with a non-
causal mathematical or structural explanation.

In this paper, I argue that inter-system explanations are in fact causal explanations. I take a close look at Renormalization Group explanations of phase transitions and argue contra Robert Batterman (2010) and Alexander Reutlinger (2014). that abstracting away from microlevel causal irrelevancies on the system specific level is not different in kind from how the causal irrelevancies are abstracted in inter-system explanations. This means that universal macrobehavior can in fact be explained through a macrolevel cause. I argue that this is so without doing away with our common sense intuitions about causality.

What role does the invocation of rights and duties play in personal relationships? And how do the duties that correlate with rights fit into the broader landscape of relational responsibilities? The kinds of cases I have in mind are close relationships – those between friends, family members, or partners. As agents actively engaged in and committed to reciprocal personal relationships, we rely on the knowledge that our relatives care for us and will be responsive to reasons concerning our well-being or the well-being of our relationships. In this context, appeals to rights and duties seem to get the responsibilities generated by personal relationships descriptively wrong. Instead, they might be better characterized by commitments, shared values, or care for one another.

Nonetheless, I argue, rights do exist in these contexts, and they play what I refer to as a background role. Though it is not often fitting to invoke them in healthy relationships, they provide background conditions of trust and security that make more robust personal relationships possible. I proceed by identifying three reasons why rights claims are often unfitting, and I then develop a general positive account of when rights claims are fittingly invoked. I argue: (1) Rights claims are coercive—they make direct demands upon one’s relative rather than engage her in reasoning, and in doing so express distrust that appeals to one’s own well-being or that of the relationship will be motivating; (2)They invoke more general relationship types and fail to acknowledge the particularities of relationships; and (3),they fail to fully characterize the wrongings that occur between close relatives. These same features make it possible for rights to provide recourse when other means of response are insufficient. A further upshot of this approach is that it scales up to more general social relationships and ultimately can be used to characterize the role of human rights in our broader normative practices.

Building on the success of last year’s panel, SWIP-Analytic will again host an event on women in philosophy in Room 5414 at the Graduate Center, CUNY, 365 5th Avenue.

All attendees are invited to join us to continue conversations over 4:15 afternoon tea at Measure (400 5th Avenue at 36th) following the presentation. RSVP for tea is required by November 1st. RSVP here.

Jessica Gordon-Roth, Participant in Rountable on Women in Philosophy

Jessica Gordon-Roth, PhD, received her doctorate from the University of Illinois at Chicago and is an Assistant Professor of Philosophy at Lehman College. Her field of interest is the history of early modern philosophy, especially Locke. Currently her research is focused on the ways in which different conceptions of “substance” and “mode” inform the early modern debate over personal identity. Gordon-Roth’s “Catharine Trotter Cockburn’s Defense of Locke” was recently published in The Monist, and her joint work with Nancy Kendrick, “Including Early Modern Women Writers in Survey Courses: A Call to Action”, appeared in Metaphilosophy this year. She will teach a course on Locke at the Graduate Center this spring.

Kimberly Keating, MBA, CEO of Keating Advisors, received her M.B.A. from the Harvard Graduate School of Business Administration and a B.B.A. in Finance from Southern Methodist University. Keating is currently a board member of Leanin.org Foundation and a contributor to Sheryl Sandberg’s best-selling book, Lean In For Graduates, where she dispenses advice on how negotiate a fair and decent salary for your first job. Through Keating Advisors, she gives speeches and workshops to help professionals with proven negotiation tactics.

Alice Mangan, M.Phil., M.S., Ph.D., recently completed her doctorate in Clinical Psychology at The Graduate Center, CUNY. Mangan works clinically with children, adolescents and young adults in individual, group and couples treatment, and has a private practice as a learning specialist, parent and educational consultant in New York City. Mangan’s clinical and research interests span the intersections of learning disability, parent and child development, and the effects of learning disabilities on the psychological development of the child, parent and family system. She is a former member of the graduate faculty at Bank Street College of Education. Mangan presented to SWIP-Analytic November 2014.

Adriana Renero, Participant in Rountable on Women in Philosophy

Adriana Renero, MA, is a doctoral candidate at the CUNY Graduate Center and holds an MA from Universidad Nacional Autónoma de México (UNAM). Her areas of specialization are philosophy of mind and aesthetics, and she has additional research interests in epistemology, metaphysics, and cognitive science. Renero has presented her work at Harvard University, UNAM, and Columbia University. Her “Consciousness and Mental Qualities for Auditory Sensations” was published in the Journal of Consciousness Studies in 2014.

Miriam Schoenfield, Participant in Rountable on Women in Philosophy

Miriam Schoenfield, PhD, received her doctorate from MIT. She is Assistant Professor in the Department of Philosophy at The University of Texas at Austin and currently Bersoff Fellow at New York University. Her primary research interests are in epistemology and ethics and normativity more broadly. Schoenfield’s “Chilling Out on Epistemic Rationality: A Defense of Imprecise Credences (and other imprecise doxastic attitudes)” appeared in Philosophical Studies in 2012 and her “Bridging Rationality and Accuracy” is forthcoming in The Journal of Philosophy.

More details to be announced soon.

More details to be announced soon.

Everyone (men & women, philosophers & non-philosophers) is welcome at our public events. 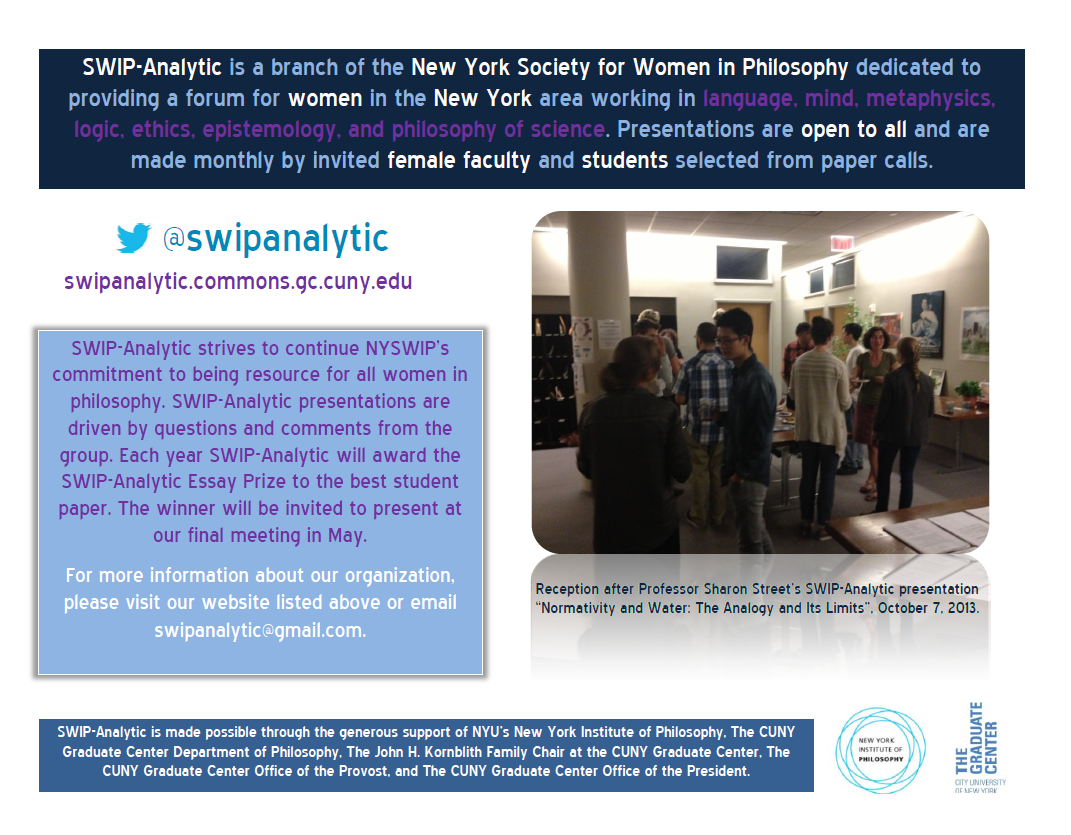