Octopuses may have more complex social interactions than previously believed, a new study has found.

Biologists studied a group of Sydney octopuses off Australia’s east coast and observed a range of behaviour that may indicate complex social signalling.

Octopuses that stand tall, turn dark and spread their web in a “Nosferatu pose” are likely showing aggression.

Conversely, octopuses may display a pale colour after losing a fight or when trying to avoid conflict.

It was previously believed that octopuses were largely solitary creatures. Changes to body colour and other behaviour were interpreted as tactics to avoid predators.

But Prof Peter Godfrey-Smith from the City University of New York, US, said the study provided a novel perspective on octopus behaviour.

It is based on 53 hours of footage and appears in the journal Current Biology,

“[An aggressive] octopus will turn very dark, stand in a way that accentuates its size and it will often seek to stand on a higher spot,” Prof Godfrey-Smith, who co-authored the report, told the BBC.

“Clearly the unusual stance is not a physiological response. It makes it look as big as it can possibly be, with its arms spread out below and the mantle, the back part of the animal, raised over the head. 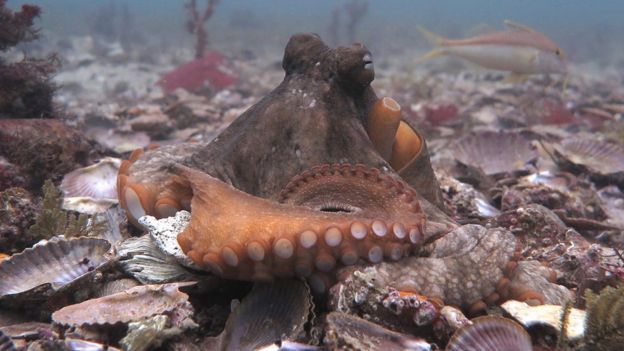 “The dark colour is produced in concert with those size-accentuating behaviours. There’s no particular physiological reason why darkness should be associated with aggression, but it does give the impression of a larger object.”

The researchers, based in Australia and the US, dubbed the stance the “Nosferatu pose”, referring to the classic 1920s horror film, because the spread of the octopus’s web was reminiscent of a vampire’s cape.

The contrasting patterns were most frequently observed when octopuses were attempting to return to their den after they had been forced out, or in the presence of an aggressive individual.

“Suppose there’s a large, aggressive guy there and you want to get back into our den, if you approach with a pale colour it could be interpreted as a non-confrontational behaviour,” Prof Godfrey-Smith said.

Another cephalopod, the cuttlefish, shows a similar set of features, with aggressive males darkening their faces and paler males withdrawing from fights. 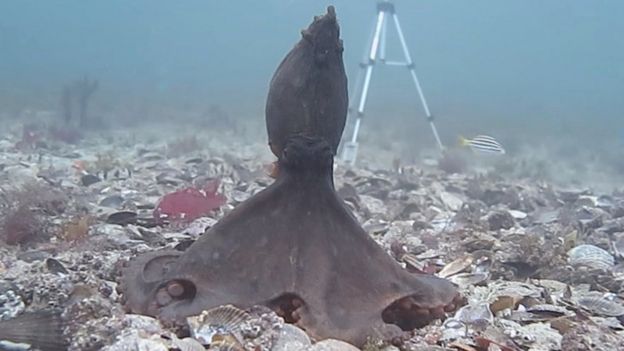 The unusually high number of octopuses living together in the colony off Jervis Bay, south of Sydney, allowed a more in-depth observation of interactions than had previously been possible.

Prof Godfrey-Smith worked with co-author David Scheel, from Alaska Pacific University, and students to comb through 53 hours of footage, observing 186 interactions between the octopuses.

These included the Nosferatu pose, along with reaching, grappling and mating.

Watching these long videos was “much more exhausting than I expected”, Prof Godfrey Smith said.

“Identifying an individual from minute to minute is very difficult, because they change colour and shape.

“If the octopus wanders out of the frame, there’s not much you can do.”

They’re more closely related to oysters than they are to mammals but it turns out octopuses are surprisingly similar to us when it comes to fighting with their neighbours.

Octopuses, renowned for surprising intelligence, were usually pretty solitary beings, said Peter Godfrey-Smith from the University of Sydney. “You do tend to see them on their own. And if you put two octopuses in a tank together you often end up with one octopus,” he told Guardian Australia.

So when he heard about a find by Matthew Lawrence, a diver at Jervis Bay in southern New South Wales in Australia, where up to a dozen individuals of the species octopus tetricus were seen in one place, his interest was piqued.

Because of an unusual environment, where a lot of dolphins and sharks feed on the octopuses, and where there’s only a small area of good quality shelter, it seemed the octopuses were forced to interact with each other.

After collecting 52 hours of footage involving more than 186 octopus interactions, Godfrey Smith and his colleagues discovered what they said was remarkable social life. The work was published in the journal Current Biology.

Similarly to the way an aggressive human or other mammal might puff out his chest to appear bigger, Godfrey-Smith found aggressive males would stand up tall and stretch out their bodies.

Octopuses can famously change colour to camouflage within complex environments. But the team found they also changed colour to signal dominance in a conflict. When a dark octopus approached another dark octopus, it was more likely to escalate to a fight involving wrestling and boxing. But when a dark one approached a paler one, the pale one usually retreated.

Recent intriguing evidence suggested octopuses might use projectiles as weapons. Other impressive behaviours include hiding in coconut shells and changing colour to camouflage in incredibly complex environments.

Octopuses and other cephalopods are mollusks, and their most recent common ancestor with mammals would have been some kind of worm. “And most molluscs are completely different with what they do – oysters and snails and so on,” Godfrey-Smith told Guardian Australia. That meant octopuses developed these behaviours completely independently. “So there’s some kind of convergent or parallel evolution,” he said.

Godfrey-Smith says the work didn’t suggest the octopuses liked each other’s company. “That’s not impossible but we don’t claim that,” he said.

Eight arms may allow for very expressive body language. Octopuses have been captured on video changing their colour and posture, and spreading out their limbs to communicate, during tense interactions with each other.

Octopuses are known to change their appearance, but this was thought to be a camouflage tactic rather than for social purposes. These animals are typically thought to be solitary, often hiding at the bottom of the sea on their own – though some recent observations suggest this isn’t always the case.

These conflicts were recorded at Jervis Bay in south-eastern Australia, where the team found that the octopuses communicated with each other during daylight hours. In combative situations, the octopuses changed the brightness of their bodies as some kind of signal. Two octopuses were more likely to grapple with each other when they both adopted a dark shade with similar colour intensity, whereas a paler colour seemed to be a sign of retreat from physical altercations.

These colour changes were often accompanied by changes in posture. An octopus that initiated an encounter would often stand tall, sometimes also spreading out its arms and moving to higher ground. “We suspect this behaviour makes the octopus appear as large and conspicuous as it can,” says Scheel.

Similar displays have been observed before, but interpreted differently. Standing tall, for example, has often been thought of as a way for an octopus to improve its view. But Scheel thinks this is unlikely because other changes in posture that occur at the same time, such as spreading limbs, don’t contribute to elevating the eyes.

Tamar Gutnick of the Hebrew University of Jerusalem in Israel thinks the new observations show a clear connection between a specific pattern or posture and a social message. “These findings show that there are still misconceptions about octopuses and their world which remain to be tested,” she says. “To date, there has been little to no attention given to social behaviour in octopuses.”

Scheel and his team were surprised they did not see more fights, given that on some occasions they saw many octopuses gathering in the same place. This suggests that the body-language signalling system may be effective at reducing conflict between the animals.

“What is interesting is the tolerance they have for one another,” says Scheel. “There must be some incentive to get along.”

Although these observations show that octopuses do communicate with each other, they may still live largely solitary lives. Confrontations were quite rare, as was mating. The most common social gesture that the team observed was when one octopus reached out an arm towards another, often from the comfort of its den, and sometimes received an arm-reach in return. “We don’t know what this behaviour is about, but we’d like to find out,” says Scheel.