NYT: Philosopher Lectures Not About ‘What Am I?’ but ‘What Is I?’

Philosophy Editor / November 6, 2012 / Comments Off on NYT: Philosopher Lectures Not About ‘What Am I?’ but ‘What Is I?’ / Faculty, In the News, Kripke, Philos of Language, Philosophy of Mind 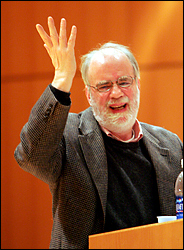 Saul Kripke turned 65 in November, just a moment ago, existentially speaking, so earlier this week the philosophy program at the Graduate Center of the City University of New York convened a two-day conference celebrating his birthday and work. Mr. Kripke, who has a similarly enlightened view of time, turned up half an hour late for the opening ceremonies.

In many circles, Mr. Kripke, who in 2001 was awarded the Schock Prize, philosophy’s equivalent of the Nobel, is thought to be the world’s greatest living philosopher, perhaps the greatest since Wittgenstein. Mr. Kripke is actually superior to Wittgenstein in at least two respects. Wittgenstein did not accomplish some of his most important work while still in high school. And unlike Wittgenstein, who was small, slender and hawklike, Mr. Kripke looks the way a philosopher ought to look: pink-faced, white-bearded, rumpled, squinty. He carries his books and papers in a plastic shopping bag from Filene’s Basement.

Mr. Kripke, a rabbi’s son, grew up in Omaha, and by all accounts was a true prodigy, so brilliant and precocious that the so-called prodigies of today are by comparison mere shadows flickering on the wall of our collective cave. In the fourth grade he discovered algebra, which he later said he could have invented on his own, and by the end of grammar school he had mastered geometry and calculus and taken up philosophy. While still a teenager he wrote a series of papers that eventually transformed the study of modal logic. One of them, or so the legend goes, earned a letter from the math department at Harvard, which hoped he would apply for a job until he wrote back and declined, explaining, “My mother said that I should finish high school and go to college first.”

The college he eventually chose was Harvard. “I wish I could have skipped college,” Mr. Kripke said in an interview. “I got to know some interesting people, but I can’t say I learned anything. I probably would have learned it all anyway, just reading on my own.”

While still a Harvard undergrad, Mr. Kripke started teaching post-graduates down the street at the Massachusetts Institute of Technology, and after getting his B.A. didn’t bother to acquire an advanced degree. Who could teach him anything he didn’t already know? Instead, he began teaching and publishing. His 1980 book “Naming and Necessity,” based on work he began in high school, is among the most influential philosophy books of the last 50 years, and his book-length interpretation of Wittgenstein, published two years later, is so thoroughgoing that some scholars now refer to a sort of composite figure known as Kripgenstein. Mr. Kripke has also written — if “write” is the correct term — important papers on metaphysics, epistemology, logic, and the philosophy of language and of mathematics.

“Before Kripke, there was a sort of drift in analytic philosophy in the direction of linguistic idealism — the idea that language is not tuned to the world,” Richard Rorty, an emeritus professor of comparative literature at Stanford, said recently. “Saul almost single-handedly changed that.” Paul Boghossian, a former student of Mr. Kripke’s, who now teaches at New York University, said, “The great thing about Saul is that he never confuses a real philosophical issue with a merely technical problem.”

Except on very rare occasions, Mr. Kripke does not actually set words down on paper. He broods, gathers a few texts, makes a loose mental outline, and then at some public occasion, a lecture or a seminar, he just wings it, talks off the top of his head, the way Socrates used to, come to think of it. These talks are later transcribed and Mr. Kripke, now a distinguished professor at CUNY, edits and revises them, draft after draft, before approving them for publication. “How Saul can do this, I have no idea,” Michael Devitt, a CUNY professor and former head of the philosophy program at the Graduate Center who was instrumental in bringing Mr. Kripke there, said of the Kripkean method. “He just seems to work it all out in his head. It’s as if he’s got privileged access to reality.”

Mr. Devitt speculated that the reason for Mr. Kripke’s aversion to writing was his extreme meticulousness. “He seems to be exceptionally anxious about getting anything wrong,” he said. “It’s an admirable trait, but Saul takes it to an extreme.”

Mr. Kripke said: ” I just hate sitting and writing — I had to do that in school. Plus, I have terrible handwriting.” He does own a computer, apparently, but Mr. Devitt, for one, believes that he has never taken it out of the box.

A number of distinguished philosophers spoke at the Kripke conference, but the high point was Mr. Kripke’s talk, “The First Person,” which dealt with the philosophical question of the meaning and reference of the pronoun I and got into some heady metaphysical speculation about the nature of the self. Speaking in a squeaky, high-pitched voice, he held forth for an hour 10 minutes, circling round and round his subject, riffing on other philosophers and occasionally darting off for a digression on, say, obesity or the theory of intelligent design. (He objects, on grounds of probability alone.) When he finished, in midsentence, more or less, he got a standing ovation.

The whole performance was a little like a Charlie Parker sax solo, one of the those extended improvs with the freewheeling, rolling rhythms, the repeated notes, the screeching, dissonant chords, and like Parker’s more experimental music, much of it soared right over the head of anyone who had not heard this kind of stuff before. But even a novice listener would have come away with some not-terrible philosophical jokes: that it’s one thing, when writing about a historical character, to try to become that character, and something else again when the character is Hitler; that David Hume, the 18th-century British philosopher, was so hugely fat he hated to look in the mirror; and that some philosophers make statements that suggest they do not have inner states and are in fact robots disguised as philosophers.

Afterward, Mr. Kripke graciously endured a small onslaught of groupies: a young man who asked him to sign a well-worn copy of “Naming and Necessity,” explaining, “You’re the reason I’m studying philosophy”; and two graduate students from Rutgers, Karen Lewis and Jessica Retz, who had taken the train in from New Brunswick so they could snap each other’s picture with the great man. Ms. Lewis explained that it was her birthday too, and that the photo session was her present to herself. “You’re my favorite 20th-century philosopher,” she said to Mr. Kripke. “I’m so excited!”

Mr. Kripke beamed in a way that suggested not only an authentic inner state but that indeterminate, hard-to-define condition of well-being and fulfillment that Kant ventured to call happiness.

Tags: Faculty
← Saul Kripke – Unrestricted Exportation and Some Morals for the Philosophy of Language
Create Your Website: CUNY Commons Philosophy Training →
My Tweets